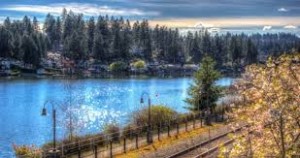 Living near a lake (as I do) provides endless opportunities to observe nature and wildlife on a daily basis. And after more than six months (seasonal activity aside), I’ve come to expect the denizens of the lake to behave in a certain way.

The Great Blue Heron stalks the shoreline and squawks at me when the dog and I pass him on the path. The Kingfisher’s haunting call always precedes the sight of him hovering and then diving into the water for a gleaming silver fish, after which he retires to his favorite cedar tree for private dining. There’s a family of mergansers with spiky topknots which patrol the east side of the lake, except when the cormorant pair show up. Whenever the cormorants are around, everybody leaves. I guess nobody likes them. And sometimes, on Thursday mornings, if the sun is shining, there’s a couple fishermen who set up their fishing poles and have a go at whatever’s biting that day. They rarely catch anything, but they never seem particularly disappointed. 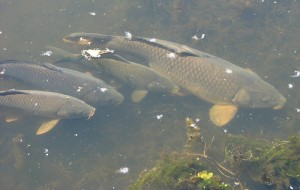 But this week, things were different. It started on Monday–fish were literally jumping clear out of the water!  At the rate of about 3 or four splashes a minute.  We had a couple days of really warm temps, so I just figured that there were a lot of bugs out and the fish were hungry. It was pretty cool. 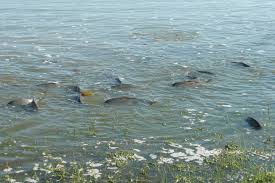 I didn’t take these pictures, but you get the idea.

But on Tuesday, the very nature of the lake had changed. The birds were silent. I could hear the splashing even before the dog and I reached the shoreline. There was not a duck or goose or bird to be seen. The waters were literally churning with fish. Big fish. Carp bigger than my arm. Hell, bigger than my leg! Swarming the shallows–piling on top of each other. Squirming, splashing, flopping. Some of these fish were humongous, and I could see even bigger fish a little further out. Kinda scary, actually. 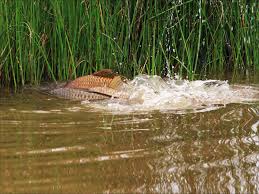 They plowed into the vegetation along the waterline–iris, cattails, even half-sunken logs were rolled and torn out as these enormous carp engaged in a phantasmagoric, orgiastic ecstasy of well, um, spawning activity. It went on all day.

And the next day it was over. Just a few 8-inchers resting in the shady waters beneath the big willow tree. No jumping. No splashing. Just a bunch of flotsam and dying vegetation floating listlessly on the water. The ducks showed up two days later, and now everything is back to normal.

I guess the party is over.

This entry was posted in Sharon Joss and tagged carp spawning. Bookmark the permalink.