The fabulous new Damonza cover for STEAM DOGS is now available on Amazon, Kobo, Barnes & Noble, and Apple iBooks for $4.99. 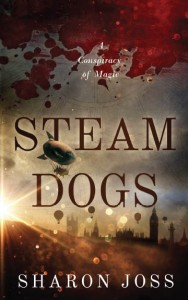 A Conspiracy of Magic

Set in an alternate 19th-century Britain, master thief Simon Atters, his best friend Captain Arvel Paretti and his airship the Il Colibri arrive on the Isle of Dogs for the Queen’s airshow. The Brits are looking for an air navy, and Simon and Arvel are looking to win the royal purse–one way or another.  Not even the clever police inspector, Roman Greenslade can deter them. But a beautiful woman and a sinister conspiracy against Queen Victoria disrupt all their plans…

From the Charge of the Light Brigade in Turkey, to the mountains of central Europe, to the Isle of Capri, this story explores a world where magic is wielded as the weapon of ultimate destruction.  I’m excited about this book, and I think fans of historical fantasy, steampunk, and alternate history will enjoy it.