Building Your World With Biomes 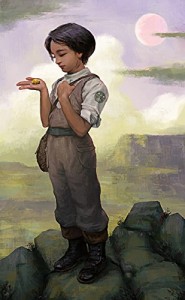 Several people have asked me about the world-building in my Writers of the Future award-winning story, “Stars That Make Dark Heaven Light”.  It’s about a human colony living on the planet Hesperidee, a rocky, arid planet with a hydrogen-rich atmosphere, twin suns, and three moons. The planet’s surface is pockmarked with impact craters, and lichens are the predominant life form. Predators are nocturnal, and include large twin-tailed stone scorpions and centipedes. The potable water lies beneath the surface, but there are sulphur pools on the surface.

Admittedly, Hesperidee It doesn’t sound like much, but everything I’ve described plays a role in the plot in some way and is part to the planet’s biome. Biomes  are defined as climactically and geographically contiguous areas with similar conditions, such as communities of plants, animals, and soil conditions. On earth  we have several different kinds of biomes, such as tundra, savanna, desert, xeric scrubland, mangroves, glacier, etc. The very nature of these environments is a critical element in building a fictional world as well.

I’ve researched biomes in various science fiction worlds as well (even Minecraft!). For example, look at the differences between the worlds of Arrakis and Pandora, expressed only by the biomes:

So when it comes to world-building, don’t forget the biome.  Incorporate it into an element of your plot and you’ve added another layer of depth to your story.  Add it to your conflict, and your world comes alive.