Posted on February 3, 2019 by SharonJoss 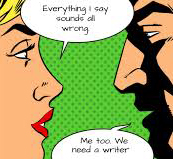 One of the secrets of writing good dialog is to make every character sound unique.  As a writer, you want your dialog (both the internal and communication between your characters) to also sound natural. And it’s got to sparkle.  To that effect, many fiction writers pepper their prose with informal expressions (often ingrained since childhood) known as Idioms & Colloquialisms.

An idiom is a combination of words that has a figurative meaning. Idioms exist in every language. Defined as a peculiar phrase that means something very different from the literal meaning. For example, if you say someone has “kicked the bucket,” it doesn’t mean that the bucket is laying on it’s side, it means (at least in the US), that someone is dead.
– It takes two to tango
– When pigs fly
– Raining cats and dogs
– Over the moon

A colloquialism is language used in daily life, consisting of informal, non-standard phrases that rise from verbal speech. Or to quote Strunk & White, “a word or expression appropriate to informal conversation but not usually suitable for academic or business writing.”  Authors tend to use colloquialisms (including profanity, slang, jargon, and contractions) to give dialog the ring of authenticity.
– Pitching a hissy fit
– Chuffed
– Dine and Dash
– Wazzup? 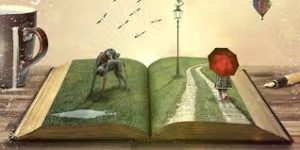 But the thing is, both techniques are considered among the deadly sins in fiction. In particular, slang use tends to go in and out of fashion, and idioms or jargon can mystify the reader, who tend to skim over the phrase (and pop right out of the story). This is deadly for any writer, and most editors viciously target idioms and colloquiallisms for deletion.

That doesn’t mean that these techniques don’t belong in the writer’s toolbox.  On the contrary, the creative use of idioms and colloquialisms can liven up the text, inject humor, lock the reader into story, and above all, reveal character. Take a tip from these folks: 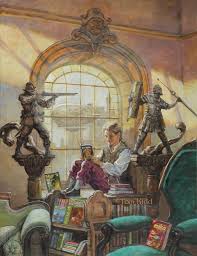 Unique?  Check. Natural-sounding?  Check. Cliche? Not on your life. Ordinary characters don’t talk this way. These characters are compelling in their language and point of view.  They sparkle. Tell me you didn’t drink up every word of every sentence and want to read more.

Next time you find yourself searching for stronger internal narrative or dialog, don’t be satisfied with mere slang or epithets. Dig deeper into your characters and their attitudes. With the proper use of idioms and colloquialisms, you’ll be  happy as a puppy with two peckers at the results.