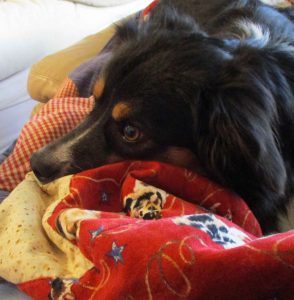 The pup I adopted in June is now 16 months old. Merlin has adjusted pretty well to his new life, as have I. We have a regular schedule that he can depend on, regular meals, daily playtime, walkies, games, baths, and grooming every Sunday. He has transformed from a scrawny, fearful, un-socialized puppy into a handsome, cautious (but curious!) teenager who is becoming less shy every day. I love him and he loves me. Unreservedly.

As it should be.

I have previously recounted the story of Piggy (akaFirst Toy), describing how Merlin came to me having never had a toy to play with. It took him a while to figure out that Piggy was his, and it took him even longer to figure out what a squeaker was. But that was then, this is now.

Merlin has acquired quite a few toys, over the past few months. He accompanies me to the pet store now (having bravely conquered his fear of the double-automatic doors and myriad of people and dogs in PetCo), and has even been able to pick out his own.

In the beginning, all toys were sacred. He dragged them ALL to his bed and lay them, when he wasn’t actually playing with them. He delighted in doing this, and it warmed my heart to observe him ‘herding’ his toys.

Recently, I have noticed a difference in how he treats some of his toys. This is different from the behavior of my previous dogs and their toys. My previous dogs (all Australian Shepherds and a Corgi) preferred to disembowel every and any toy they could sink their teeth into. Rowan did have one stuffed animal (Pony Puppy) that she carried around for years, and would let none of the other dogs near it. But I think that was because Pony had a pressure sensor inside it that neighed every time it was picked up. I think Rowan thought of the ‘neigh’ as a puppy squeal, because she carried it around like a puppy. Over the years, the neigh began to sound more like a moan, and then disappeared altogether, but by that time, she’d lost her hearing (along with her interest). 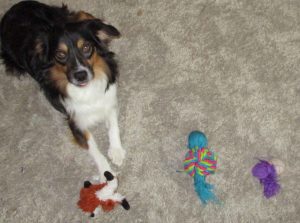 Anyway, back to my point. Some of Merlin’s toys get the exact same disembowelment treatment that my previous pack bestowed on their new toys. You can see from the picture, that (from left to right) Foxy, Big Dub, and Wubbie all seem to have met a similar fate. Big Dub and Wubbie (actually, Big Dub and Wubbie are the same toy, but in two different sizes) in particular, have each had all 6 of their legs chewed off in the first week. But they are extremely popular, mostly because their squeakers are still functional, and are still presented to me regularly in anticipation of a good came of catch. 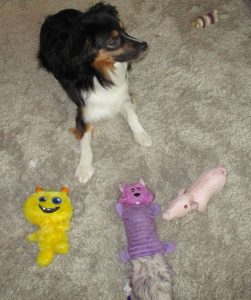 However, there are three toys that, while they are played with every bit as much as the um, mutilated toys, they are in nearly pristine condition. The are (from left to right), Beastie, Purple Squirrel, and the now legendary Piggy (aka First Toy).
Note the near pristine (if somewhat grimy) condition of Piggy in particular, who sleeps in Merlin’s crate every night. And Beastie was the first toy Merlin ever picked out at PetCo. Purple Squirrel, who has 3 (count ’em THREE squeekies inside) is by far the MOST played with toy in Merlin’s flock, with Big Dub holding tough in second place.

I don’t know if Merlin has ‘favorite’ toys or not, but it seems to me that he has two categories of toys: those he chews on and those he doesn’t. I couldn’t figure out why. All the toys have squeekies. All are mouthable and small enough for him to carry around. But after taking pictures of the toys this morning, I was struck by something I hadn’t noticed before–none of the chewed up toys have faces. Oh, foxy had a face for about 20 minutes when he first arrived, but it was a toothy growly face. Wubby and Big Dub don’t have faces at all.

But Beasty, Purple Squirrel, and Piggy all have smiley faces.
And thus is my theory of the Puppy Love Paradox.

Have you smiled at your dog lately?

This entry was posted in dogs, Merlin, Sharon Joss. Bookmark the permalink.