How Time Flies…Until it Doesn’t: Counting the Hours 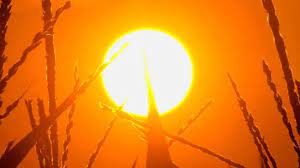 I always celebrate the Solstices, but this year, the Summer Solstice had me thinking about how fast time flies. How quickly the sun fades and the skies dim. Sunset in Oregon on Solstice is after 9pm; not as late as in the Eastern time zones, but no less enjoyable. At this time of year, an hour after sunset, a walk in the gloaming with the dog  brings sights of hatchling garter snakes as they slither from green lawns across the sidewalk into the sheltering forests of parkway ivy. Bats swoop and sing their silent (to me) siren songs to mosquitoes and other winged snacks. With the first stars peeking out of amethyst skies, all is well and good.

Until it wasn’t.  Last week, the sun decided to teach us all a lesson and the full strawberry moon and high pressure in the atmosphere aligned to bring the Pacific Northwest what will forever be known as the three highest temperatures ever  recorded. A week ago, as an Oregon native, I snerked at the thought of plus-100 degree temperatures in June; I scoffed that  “some weather models” were predicting highs of 114 to 117 degrees for this weekend.  This part of Oregon just doesn’t get that hot.  Fake news, right?

Yesterday, the temperature in Beaverton and Portland and the surrounding areas hit 108 degrees, smashing the earliest recorded highs (and highest lows) in history for the area.  Unheard of.

I daresay there were a LOT of folks last night that (like me) who don’t have air conditioning and had three fans going AND a dehumidifier.  That’s right, this is Oregon, not Arizona–no dry heat for us; the humidity has been hovering around 55%. I stayed up until midnight, checking the deck thermometer every hour, waiting for the outside temperature to drop below the 86 degrees I had managed to maintain inside, but finally had to give it up and open all the windows.

And today, Sunday is expected to be even hotter, with an expected record-smashing high of 114 degrees and and overnight low on the far side of 80 degrees.  And after yesterday, I now believe it.

So here I am, at 11am on Sunday morning, sitting in a tee-shirt and shorts on a sunny summer day, while the windows are locked up and drapes shut tight. Temperature inside: 86 degrees.  Temperature outside: 97 degrees and climbing.  The weather stations have posted hourly forecasts as to how long this extreme heat event will last; On Monday at midnight, the temperatures are supposed to ease off to below 80 degrees.