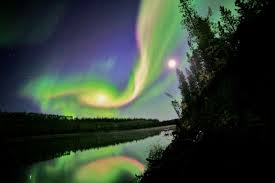 Here it is, the shortest day of the year. A time to celebrate the end of darkness and return of the light.  It’s the time of year I review my accomplishments against the goals I set for myself twelve months ago, and develop/revise my objectives, plans, and goals for the coming year.

I wrote 135K words this year–less than half as much as last year, and far short of the 340K goal I’d set for myself.  I finished two novels (STEAM DOGS and CHAOS KARMA versus none last year), but I’d planned to write five. And I only managed to write five short stories (I’d planned to write eight).  Although my actual productivity fell far short of my plans for the year, I would not call it a failure. The learning opportunities this year have been extraordinary. I experienced my first interviews & book signings, went to WoldCon, was an invited panelist for OryCon, and attended four week’s-worth of writer’s workshops, including two weeks at Taos Toolbox. Incredible. 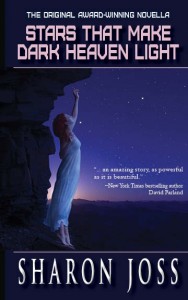 I’m starting to see tangible evidence that I’m on my true path, and that my writing is improving. Winning the WOTF Golden Pen award and being named finalist for the Canopus Award for science fiction are part of it, but positive reader response is thrilling too.  I also had three of my stories published in pro markets this year: 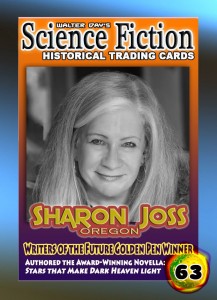 And then there’s also the element of good luck, which one can never plan on, but which is so delightful when it occurs: meeting wonderful new people and finding my ‘tribe’ of fellow writer peeps, getting my very own trading card, and being invited to write a story for a closed anthology.

My resolutions for 2016 are to finish at least 3 novels, a novella, and at least 6 short stories.  And to enchant and thrill readers by writing the best stories I possibly can, and then do it again and again.

And to see the new Star Wars movie.