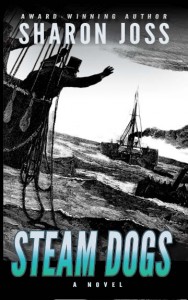 Wootie-woot! I’ve been waiting a long time to show you this, but here it is, the reveal of my upcoming thriller novel, STEAM DOGS.

I’m a huge fan of action and adventure in both my reading and movie preferences. I’ve been wanting to write a paranormal thriller for a very long time. Inspired by the likes of Dean Koontz, Dan Simmons, Scott Lynch and others, I finally decided to take a crack at the genre myself. Of course, being me, I can’t seem to color within the lines of one genre. I think of it as a supernatural-heist-crime-detective-magic-action-adventure-with-horror-elements. That’s probably confusing to most people,  so here’s the blurb:

In this alternate history thriller, airships and aerialists from across Europe converge outside London on the Isle of Dogs for an air show.   Among the crowd, a master thief with his eye on the Queen’s jewels, a Metropolitan Police inspector, and a former royal wizard dead set on kidnapping the commander of the most powerful army in the world—Queen Victoria of Britain

Some might call it steampunk. I like to think of it as Mission: Impossible with magic. Coming to a bookseller near you in November.  Sign up for my mailing list (on the right-hand side of this page) and you’ll be the first to know (and get a free short story, too).