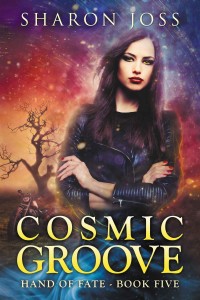 I am thrilled to announce that Cosmic Groove, book 5 in my Hand of Fate series was released this week and is now available from Amazon, Barnes & Noble, Kobo, Apple i-Books and wherever you buy books.

Sometimes, every deal is a bad hand.

Mattie’s oath to Morta is under siege, and now there’s hell to pay. With an immortal sorcerer and his demon on the rampage, and a feud about to explode between the lycans and the witches, only a bad deal with the dead can help Mattie lift a centuries-old curse and rescue Rhys. But neither Mattie nor her friends suspect there’s a deeper, darker plot that threatens the lives of everyone in Shore Haven.

For Mattie Blackman, the Hand of Fate may be a very bad deal indeed.

Finishing a novel and releasing it out into the world always brings a fantastic feeling of accomplishment, but also has me on pins and needles until the first reviews come in.  Will people like it? Was it worth the wait?  I hope so. I look forward to hearing from you.

2 Responses to Cosmic Groove is Here!