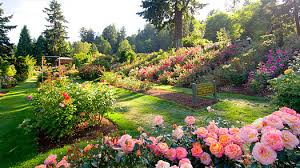 Portland is known by many names (Rip City, Stumptown, and Beervana, to name a few), but since the term was first used in 1888, it’s been known as the City of Roses, and it’s been the city’s official nickname since 2003. The first Portland Rose Festival was held in 1907, and it’s the second largest all-floral parade in the US (after Pasadena’s Tournament of Roses parade). The cool thing about living in Portland (or thereabouts) is that when the roses bloom, it’s like the whole city wakes up. 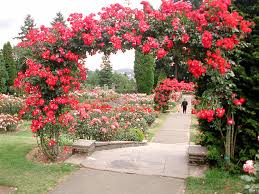 This week the roses started blooming in my neighborhood, as well as all over the city. On my walk this morning, it seemed as if every garden had roses in bloom. Last year I made my first trip out to the International Rose Test Gardens, and spent a blissful afternoon strolling through the most beautiful and scenic gardens I’ve ever been in. This year, I plan to go again.

Although the Parade isn’t until June 7th, the general activities kick into high gear next weekend, and last through July 11th.  The roses keep blooming until fall.