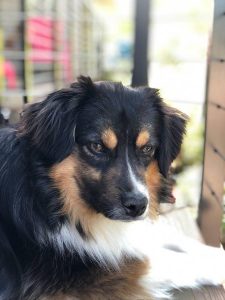 In the seven weeks he’s been living with me, young Merlin has gone from 20.5 pounds (per the vet’s scale) to a whopping 23.6 pounds. He’s filling in and his bones no longer stand out, but he’s still ‘quite lean’, according to the vet. She says a good weight for him will be around 25 lbs, so we still have a ways to go.

Clearly, in addition to not getting enough to eat, he did not have much in the way of toys.  In his first few days with me, he could not bring himself to pick up or show any interest in the toys I’d gotten for him.  In particular, there was a little pink pig that caught his eye.  He would not look directly at it, but I could tell he wanted it.  I tried to give it to him, but he wouldn’t take it. It wasn’t until I gave him an old sock with a knot in it that he realized that he could have something to do with as he wished.

For a week, that sock was (and still is) the best thing since eating twice a day. The other toys remained ignored, but the little pink stuffed piggy called to him, in that secret language that only coveted things know. I was pretty sure he wanted it, but he wouldn’t take it from me.

So I gave him a box.

The simple joy of shredding a cardboard box into tiny bits of flotsam cannot be overstated. It rocked his world. 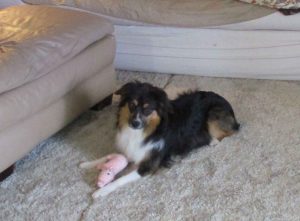 I think the action broke something open inside him–gave him permission to embrace his inner puppy. It took him about 30 minutes to destroy the box, and when he was done, he made a bee-line to the pink piggy and claimed it for his own.

I thought he would disembowel the creature within minutes (all my previous Aussies were experts at stuffed animal disembowelment), but Merlin does nothing but carry it around and mouthe it.

We play a game.  He brings Piggy to me and I give it back. That’s it. That’s the game.  Sometimes, he brings me the sock AND Piggy.  The purple squirrel with the three squeekies is also included at times, but that’s another story.

Piggy is his pride and joy.

This entry was posted in Merlin, Sharon Joss and tagged dogs, Merlin. Bookmark the permalink.