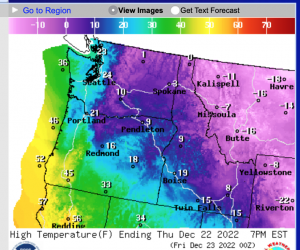 With it, a ‘storm in a generation’ has begun a thorough tour of most of North America, just to remind us all that in the timeline of eternity, the Ice Age was mere moments ago. Oregon isn’t known for harsh winters, but it was 18 degrees this morning, with sustained winds of 40mph.

Serious Weather.
Good thing I’ve lived in both central New York and Idaho, and know what to do. I donned two sweatshirts, a down vest, two down parkas, a hat and scarf to walk the dog this morning. By tomorrow, temps are expected to go into single digits or below. The ice storm is expected to start tonight, and deposit at least a half inch of solid ice on every exposed surface. Too dangerous to even attempt walking. Merlin and I will limit outdoor time to very brief breaks on the lawn outside. And whisper a prayer that the power doesn’t go out.

This is dangerous weather. Primal.

I can almost recall some sort of ancestral uneasiness. Hunker down in front of the fire. Don’t go out there. We are helpless before the storm: the winds that bite, the ice that kills. Stay inside. Be safe. Let it blow itself out.

The sun will return. While the winter solstice brings the longest night, we also welcome the return of the light. Of hopes and dreams for the future. Of better times to come.

Be well. Be warm. Dream of the sun to come.
As it does.

This entry was posted in Sharon Joss, solstice, winter and tagged Happy Solstice. Bookmark the permalink.