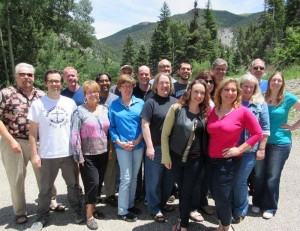 A pilgrimage is a journey or search of moral or spiritual significance. Typically, it is a journey to a shrine or other location of importance, although sometimes it can be a metaphorical journey into someone’s own beliefs.

Along with 16 other fellow writers, I’ve spent the last two weeks sojourning at Taos Toolbox, in beautiful Taos Ski Valley (New Mexico), where our hosts and mentors, Walter Jon Williams and Nancy Kress have been at the hub of our focus, hearts and minds for the past two weeks.  It’s the first time I’ve ever been part of such a large group of writers over such a long period, and we spent nearly every waking moment focused on improving our craft.

Every day, we listened to lectures by Nancy and Walter, which were tailored to address specific issues they found in our manuscripts.  Afterwards, we went around the (big) table and each of us were allotted two and-a-half minutes to critique (Milford-style) the selected student manuscript. After everyone had finished, Nancy and Walter then shared their  more detailed feedback. The benefit of having two instructors was especially helpful, as Nancy and Walter often had differing views, which in itself was fascinating.  I think I learned as much from listening to the other critiques as to my own.

At the end of the first week, indie publisher Emily Mah shared some great tips on self-publishing, and best-selling author Carrie Vaughn also shared her experiences on writing successful series. 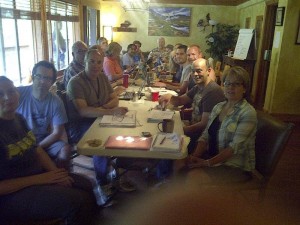 The second week was more of the same, but I think we all agreed that the second week submissions were far better and more imaginative than the first. We were also given homework–fun writing assignments which gave us the opportunity to demonstrate our understanding of the lecture concepts. We also got some really valuable practical sessions on the business of writing, and both Walter and Nancy were wonderfully open and forthcoming as they answered our questions. Some nights, Walter fired up the video player and we munched popcorn and watched films with an eye for plot. I was surprised to discover the plot similarities between a 75-year-old American drama and a modern Japanese coming-of-age story. Good stuff.

The Taos Toolbox class of 2015 is done, but (for me) the experience will never be forgotten.  I am changed–excited about my craft, my future as a writer, and the new friends I’ve met. Thank you, Walter and Nancy.

And for anyone else who is serious about their writing and looking to step up their level of craft, I highly recommend Taos Toolbox.