As 2016 draws to a close, I realize that it’s that time again. A time to look back at the books I’ve read during the year and share some of the top lessons I’ve learned as a writer. More than most other years, the best I can say about 2016 is that it’s nearly done. Every month has been tough–good news has been hard to come by. Good books, however, are another matter.
THE LIST:
I successfully met my goal of reading 50 books this year. Less than I wanted, and I discovered a couple of new-to-me authors I’m happy to recommend.
Favorite new (to me) authors: 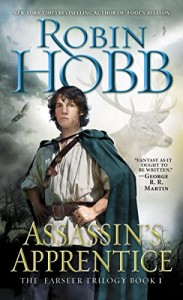 I’ve had her books sitting in my ‘read me next’ bookshelf for years, but had never read any of Robin Hobb‘s books until this year. I plowed through all three (hefty) volumes of the Farseer Trilogy in record time, marveling that each book was better than the previous. What a wonderful cast of characters–this complex world is fascinating, and every bit as unique and addicting as George R. R. Martin’s Song of Ice and Fire series. Wonderful stuff, I’m planning to dig into her Fitz & the Fool series as soon as I can.

Not everyone enjoys horror, but I do. This year, I read quite a bit, some of it quite good. In particular, The Least of My Scars, by Stephen Graham Jones stunned me with a truly horrific tale–his beautiful, offhand literary style reminds me of Theodore Sturgeon.   Definitely too intense for some readers, but oh so complex and powerful. His newest book, Mongrels, is on my must-read list.

On a very different level, I also enjoyed Ballad of Black Tom by Victor LaValle. I am not a fan of H. P. Lovecraft, or anything Cthulhu, but I thoroughly enjoyed this novella, where jazz musicians provide the necessary magic to summon a savage beast.
Notable Classics: 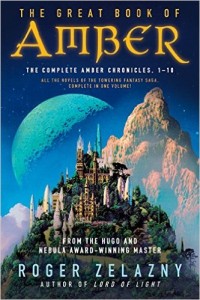 Every year I make an effort to read a few of the fantasy or science fiction classics of the genre. Last year, I read the first two volumes of Amber by Roger Zelazny. This year, I finished reading the series (all 10 books). I can see why it’s a classic, I loved the characters, the tarot cards and family intrigue, even as I would have been satisfied if the series ended after about volume seven or eight. I would certainly recommend the first five volumes–which retain a contemporary feel even 40 years after its original publication date.
Biggest Surprise:
Another book that has been out for a while, but I hadn’t had a chance to read was The Girl With All the Gifts, by M. R. Carey. I didn’t realize it was a zombie story until after I started reading it, but by then it was too late–I was hooked. A sweet and original tale of a bleak future and hope against all odds.
Favorite Books from Favorite Authors: 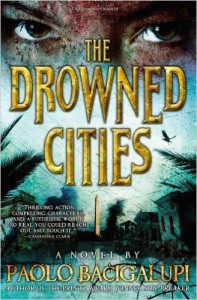 Last year, I was dazzled by Paolo Bacigalupi’s The Windup Girl. This year, I became a true fan as I read my way through much of his backlist, and enjoyed each novel: The Water Knife and Ship Breaker were both excellent, but I really adored The Drowned Cities. The bleakness of a post-apocalyptic America, consumed by swampland, and torn apart by maverick generals, heartless child soldiers, and lab-created life forms is a fantastic adventure on multiple levels. Like The Windup Girl, his novels work on many, many levels, and his future hits disconcertingly close to home.
Favorite Writing Book(s):
I find that there are fewer writing books that offer something new, craft-wise. Annually, I usually revisit Stephen King’s On Writing, Ray Bradbury’s Zen in the Art of Writing, Lajos Egri’s The Art of Creative Writing, and Larry Brooks’ Story Engineering. Now I have to add Steven Pressfield’s The War of Art and Do the Work. This year in particular, resistance has been a real bugaboo for me. I’ve found his books to be both practical and inspiring.
THE LESSON:
One of the first rules a newbie writer learns is don’t be a jerk. That said, I think I’ll remember 2016 as the year of the jerk. Politics and the international stage aside, the lesson was brought home to me as I witnessed writer after writer being a jerk. For example, at WorldCon this year, both men and women writers, in separate incidents, were rightly expelled  for bad behavior–at a place where science fiction fans, families, and artists come together to celebrate fandom and genre–not to be subjected to a particular panelist’s self-indulgent demand for attention. Another writer I know was pilloried by peers in social media for bad behavior (nothing illegal, but abusive nonetheless). The storm of outrage grew to the point where contracts were rescinded and freelance jobs lost/relationships severed. I pass no judgment on either the behaviors or the consequences. Karma is a bitch. But the virulent reaction by uninvolved bystanders stunned me–a mob of ‘supporters’ lashed out at other authors and editors in a big ball of hate that went on for days, if not weeks. In football, this is called piling on, and the offending team would be charged with a penalty. This is because once the player is down, the sheer weight of the extra piled on players can cause unnecessary injuries. As soon as the referee blows their whistle, the play is dead and no extra hits are allowed. There is no excuse for piling on. Being a jerk cuts both ways.

I’d planned to add a couple of other lessons for the year, but after writing this one, nothing else seemed worthy. As a writer, I know to harvest those pent-up emotions and infuse my characters with all that outrage, disgust, and sense of injustice. Writers are lucky; we can add jerks to our stories and our readers will love hating them. No need to be the living example.